skip to main | skip to sidebar

So #4 is off to the printer, and should be on sale at Strange Adventures by the end of the month, hopefully. In the next few days I'm going to try and get a PayPal option going on this site as well, if you'd like copies shipped to you. I can sell you issues through PayPal now--email me at davekhowlett@gmail.com for details if you're interested--but I would like to get a shopping cart and all that jazz installed right on the site. But, in the meantime, here's the cover to the fourth issue! 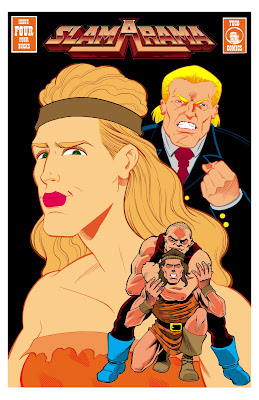 Also, it may be a week or two before more pages go up--my computer monitor has, for the last few months, been developing multicoloured vertical lines up and down its screen. Not enough to stop work, but just enough to be really annoying. I didn't want to get it looked at until the fourth issue was off to press (because I didn't want to delay the issue any more than it already was), but now I have no further excuse. So, when the next batch of pages (the final batch, I should say) start appearing, they'll either be coming from a repaired computer...or a new one, if it's a problem that can't be fixed (I'm really crossing my fingers for that first option).
Posted by Dave Howlett at 5:04 AM No comments: 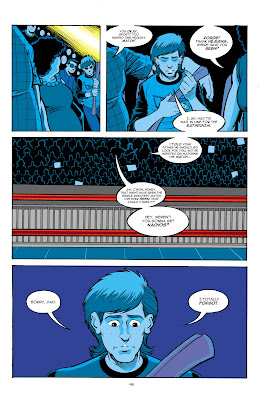 Whew! And that constitutes the last page of what will make up the second-to-last issue. I'll be off the grid for hopefully not too long, getting SLAM-A-RAMA issue #4 ready for printing--I'm hoping to have physical copies ready for sale by the end of July. Back with more soon!
Posted by Dave Howlett at 5:24 AM No comments:

Dave Howlett
Lifelong genre enthusiast. I made the comics SCENESTER and SLAM-A-RAMA (both available at tucocomics.blogspot.com and slamaramacomic.com), I write comic and movie reviews for NerdSpan (nerdspan.com), and I'm sure I do other stuff that I'm not remembering right now.